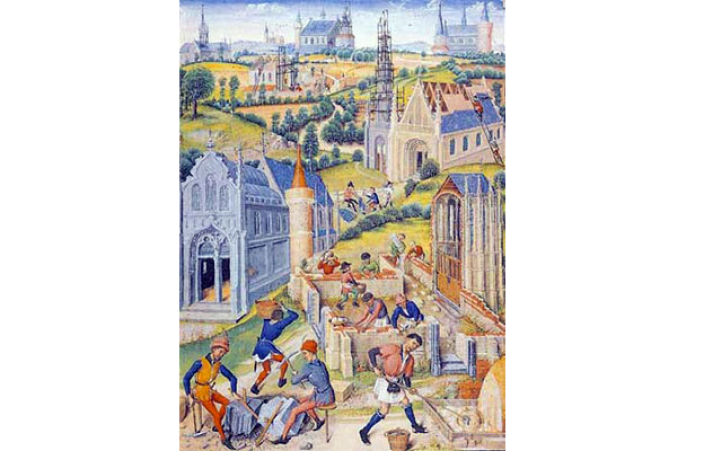 Medieval building construction, showing the new work being added to the old

Freemasonry is one of the world's oldest fraternal societies. The lessons Freemasonry teaches in its ceremonies are to do with moral values (governing relations between people) and its acknowledgement, without in any way crossing the boundaries of religion, that everything depends on the providence of God. Freemasons feel that these lessons apply just as much today as they did when it took its modern form at the turn of the 17th century.

Despite what many people claim, Freemasonry is not a secret society. Masonic so-called secrets are solely used as a ceremonial way of demonstrating that one is a Freemason when in lodges meetings. In any case, they have been exposed by the media for almost as long as Freemasonry has existed and are not important informations anyway. The real point of a Freemason promising not to reveal them is basically a dramatic way of promising to keep one's promises in general.

Other reasons why Freemasonry cannot be called a secret society are that freemasons do not promise to keep their membership secret (they can tell anyone they wish), that our society is regularly registered society with its statute and finally - that some Croatian freemasons gave interviews to media presenting the fact of establishing Grand Lodge of Croatia as well as our aims, what we are continuing on this pages.

It is ironic that because freemasons used to be reticent about their membership (because they were and still are taught never to use it to advance their own interests), critics have taken this the wrong way round and think that there is something secretive and nasty going on. Nothing could be further from the truth.

Masonic ceremonies are secular morality plays that are learned by heart by members of the lodges for the benefit of the person who is becoming a Freemason or who wishes to explore Freemasonry further. Each ceremony has a message for the candidate. A further reason why freemasons do not go around broadcasting their contents is simply because it would spoil it for the candidate - exactly as in the same way you would not tell someone the ending of a book or a film.

According to the its Constitution of the Grand Lodge, Croatian Freemasonry belongs to the system called the Symbolic Freemasonry (Craft) and works in a three traditional symbolic degrees. For those who want to explore the subject in more depth it is necessary to mention that there is a host of other systems of Freemasonry.

These three ceremonies (or degrees as we call them) look at the relations between people, man's natural equality and his dependence on others, the importance of education and the rewards of labour, fidelity to a promise, contemplation of inevitable death, and one's duty to others.

Furthermore, Freemasons are not allowed to discuss religion at meetings. Croatian Freemasonry is also strictly non-political and the discussion of politics at Masonic meetings is expressly forbidden. These rules both stem from Freemasonry's aims to encourage its members to discover what people from all different backgrounds have in common. As is all too well known, debate about religion and politics has all too often led, when allowed to run riot, to discrimination, persecution and war.

Although all Freemasons are required to profess and continue in a belief in a Supreme Being (symbolised by a Great Architect of the Universe), and their ceremonies include prayers, Freemasonry is not in any way a substitute for religion. It has and can have no theological doctrines, it offers no sacraments, and it does not claim to lead to salvation.

A Freemason is thus basically encouraged to do his duty first to his, freely chosen, God (by whatever name he is known) through his faith and religious practice, and then, without detriment to his family and those dependent on him, to his neighbour through charity and service.

None of these ideas is exclusive to Freemasonry, but all should be universally acceptable and Freemasons are expected to follow them.

Reviewed by: Grand Lodge of Ancient, Free and Accepted Masons of Croatia