What is Cryptic Masonary?

Without the Royal and Select Master degrees, neither the Master Mason degree nor the Royal Arch degree is complete. These two degrees account for the concealment and preservation of the treasures revealed in the Royal Arch.

The Super Excellent Master is an honorary degree, worked in some jurisdictions but not in Croatia. Qualifications for which are fulfilled by virtue of being in good standing in a Council. This degree is the most dramatic and spectacular of all Masonic systems.

Candidates who receive the degree are impressed with its dignified ritual and relevant teachings. It contains one section which is generally regarded as an outstanding display of symbolism and content of philosophy. The ritualistic presentations in the degree explain the articles contained in the Holy of Holies of King Solomon's Temple, including the Ark of the Covenant. A knowledge of which is essential to those who would fully understand the preceding degrees. The principal characters in the degree are Solomon and his royal assistant.

The degree of Select Master has not always been associated with that of Royal Master. The two degrees were combined into one rite in the early 1800's. There is strong evidence to support the theory that the degree came from a similar degree in the Scottish Rite called Intimate Secretary or Grand Tiler of King Solomon. Regardless of its origin the legend of this degree is old.

The scene of this degree is laid in the underground vault of King Solomon's Temple. The events which characterize the degree are stirring enough to make it one of intense interest. The ritualistic presentations contain the story to "complete the Circle of Perfection" in Ancient Craft Masonry. 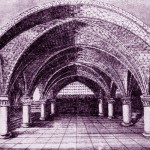 What is Cryptic Masonary?