The Order of the Red Cross was founded by Constantine the Great as a memorial of the Divine Miracle which brought about his conversion to the Christian faith and also as a reward for the valor of certain of his soldiers at the memorable battle fought at Saxa Rubra, October 28 A.D. 312. Tradition informs us the Emperor assembled the chiefs of his Christian Legions and in the presence of his other officers, constituted this Christian Order of Knighthood, by creating them Knights of the Red Cross. A special bodyguard of Christian warriors was appointed by Constantine, and placed under the command of Eusebius, Bishop of Nicomedia, who was considered the Viceroy, or second in command. The Red Cross Degree traditionally recites the circumstances attending the conversion of Constantine to the Christian faith, and his alleged vision of the cross in the heavens, around which was the inscription In Hoc Signo Vinces.

Only Knights of the Red Cross by Royal Decree were eligible for the Order of the Holy Sepulchre which was instituted in A.D. 326 to commemorate the discovery by Helena, Constantine's mother, of the Sepulchre of Christ. The original investment of the Knights into the Order of the Holy Sepulchre were made at Jerusalem, the Knightly vows being made while kneeling at the sacred tomb. It is also said that Constantine instituted the Order of Knight of the Grand Cross which he conferred on several of his generals and magistrates as a special mark of merit and distinction.

The third working order is known as the Holy Order of St. John the Evangelist and was founded on an incident which is alleged to have taken place during the reign of Julian the Apostate during the work of rebuilding the Temple of Jerusalem and his discovery of a book which when opened showed the following words in large letters, "in the beginning was the Word, and Word was with God, and the Word was God." The laborers who were present at this discovery all became Christians and took the title of Knights of St. John the Evangelist to commemorate their assumption of the Mantle of Humility of the Lord Jesus. 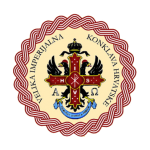