The Grand Commandery of Knight Templar of Croatia

There are no Degrees in the Commandery they are called "Orders" and there are three of them, namely: The Order of the Red Cross, the Order of Malta, and the Order of the Temple. It is a useless waste of time to attempt to trace a lineal kinship between them and the knightly Orders of the Crusades, but this could be done, perhaps, if the Masonic historian were as credulous of Medieval and Modern history as he is of all things pertaining to King Tut.

However, this is wholly unnecessary, because the Orders speak for themselves, and the Order of the Temple is the very capsheaf of Masonry.

Around the altar of the Lodge, the Gentile and Jew, and Hindu and Mohammedan can fraternize in the Brotherhood of Man, acknowledging their dependence on the Most High and enjoying the blessed communion of "Brethren who dwell together in unity." In the Chapter and Council, the Jew and Gentile enjoy a closer relationship, since their philosophy and their theology have stood the test of time, and there is a harmony which must be experienced to be understood. But only the Christian can conscientiously pass the portals of the Commandery, because two of these Orders are founded on the deeds and customs of the knights of old, who were devout Christians, and since 1760, only Royal Arch Masons who were Christians have been eligible to knighthood.

The Order of the Temple is veritably the Christian's paradise for reflection, for here he can interpret Masonry conformably to his religious belief. Jesus Christ has no place in the Lodge, Chapter or Council, and the Mason who tries to place Him there is a supreme egotist. If God, in His wisdom, saw fit to withhold the Christ from the world for four thousand years, it is not becoming in any Mason to deviate from the Divine Plan or attempt to improve upon it by forcing Jesus into Masonry until Masonry is prepared to receive Him. The Lodge, Chapter and Council deal historically with events under the Mosaic dispensation, and not until the Mason has reached the Commandery is he symbolically entitled to the Christ. As men of old looked forward with longing eyes to the time when the Star should appear in the East, so should every earnest Christian Mason look forward to his entrance into the Commandery where he is entitled to a realization of his fondest hopes.

The Knights of the Order of the Temple, or Knights Templar, can look back upon the while plan of Masonry with a clearer view; it seems to be a more vitalized and a more sacred system than ever before. He recalls the marvelous parallel of the Old Testament and the Fellowcraft's Degree, both a thousand years old when Jesus was born, the Old Book prophesying that there would come One upon the Earth through Whom all men must enter the Kingdom of Heaven, and the Fellowcraft's Degree telling us of a man, half Jew and half Gentile, a master builder whose blood represented alike God's Chosen People and the Gentiles, who constructed the two large brazen pillars that were set up at the entrance porch and between which all men must pass into King Solomon's Temple, which was the symbol on Earth of the heavenly Temple.

If the Christian's mind should be perplexed as to Whom this man typifies, all doubt disappears when this master builder, this paragon of fidelity and integrity, falls without sin or blame and is borne almost in the direction of Calvary, and is raised from the tomb by Him who symbolizes on Earth the Great King on His heavenly throne.

When the devout Christian, who is likewise a zealous Mason and Knight Templar, looks back upon Masonry in a contemplative mood, he seems to see the footprints of the Creator in every avenue, the Divine hand seems to have fashioned each setting, he beholds each scene illuminated by a new light, each Degree has a new and deeper meaning. The Christian Mason closes his York Rite career with the Order of the Temple, a ceremony so solemn, so beautiful and impressive, so tender in allusion, so sublime in thought, that he never forgets it, never regrets it, but enjoys it more and more as he advances in learning and experience; then, after a few years of earnest thought and patient study, he must guard against over zealousness, or his reflections will bring him perilously near the conclusion that Masonry is a divine science.

Source:
Sam J. Helm, PGHP, The Commandery of Knights Templar, from "A Brief Application of the York Rite to Daily Life", 1924. 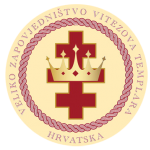 The Grand Commandery of Knight Templar of Croatia