What has attracted so many Brethren to seek further light in Royal Arch Masonry?

The Royal Arch Degrees was considered most important in the early years of Freemasonry and so dogmatic was the Mother Grand Lodge - from which all Speculative Masonry derives - that in 1813, when the two grand lodges in England united, a firm and solemn landmark was adopted and placed in the Articles of Union to guide Masons throughout the world forever on this matter: "Pure Ancient Freemasonry consists of but three degrees, viz., that of Entered Apprentice, Fellowcraft, and Master Mason, including the Supreme Order of the Holy Royal Arch." The landmark has never been changed and to this day no other degree has been officially recognized by the Mother Grand Lodge and every rite, system or additional degree in Freemasonry cannot confer its degree on a Master Mason until he has received the Royal Arch Degree. Naturally, this is as it should be, because a man is not a Master Mason until he receives the Master's Word and he can only receive it in the Royal Arch. 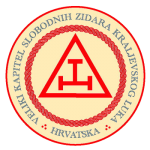